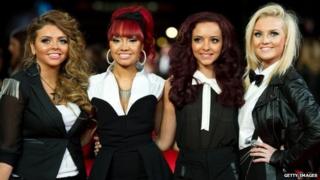 Little Mix have become the first group to win the X Factor.

The girl band, mentored by Tulisa beat Marcus Collins to take the title.

Judge Louis Walsh has predicted that Jade, Perrie, Jesy and Leigh-Anne will become the biggest girl band in the UK.

Marcus and Little Mix went head to head in the final, after Amelia Lily was voted off on Saturday. They both sang their favourite song from the series, a Christmas song and their own versions of the winner's single.

The final was held in front of an audience of 10,000 people at Wembley Arena in London.

Marcus, who was mentored by Gary Barlow, said that Little Mix "really deserved" to win the competition. 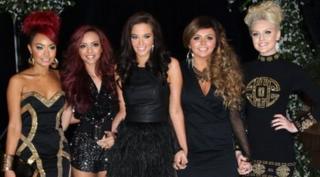 Little Mix - who come from London, Essex and Tyne and Wear - had never met before being put together as a band during the boot camp stage of the X Factor auditions.

Their first single, a cover of Damien Rice's Cannonball, will be released for download from Monday.

This year, more people have been watching Strictly Come Dancing than X Factor and some people think the ITV programme is losing it's, erm.... X Factor. We asked what you think and here are some of your comments.

"I love both X Factor and Strictly and I hope neither of them go! I think less people watched X Factor because of the change in judges."

"I think that the X Factor is really good, although I can see why people are switching over to Strictly. The X Factor doesn't have as many good singers. I can't believe people like Goldie and Frankie were even considered to be put through to the live shows. Personally, I liked Marcus, but Little Mix are really good so I hope that they go far!

"I'd never swap the X Factor for Strictly. If i did i wouldn't have found inspirations like Little Mix, they deserved to win, team Little Mix all the way!"

"I think it is because the X Factor has become more predictable lately and that there was a sudden change in judges. I am guessing that we all miss Simon, Cheryl and Danni."

"I think that the X Factor has been more competitive and exciting than past years. It was a hard fight for Little Mix but they deserved to win."

"I love the X Factor but I'm put off by all the breaks! I am appalled by how many times Dermot has to say 'Now, after the break...' following every act."

"The X Factor is a bit repetitive - every year they do the same thing. I do like the X Factor but one thing that would make it better is if they replaced Louis Walsh."

"I think the X Factor is amazing and so are the judges! I don't know why people are changing to Strictly. The only funny thing about that is show is Bruce!"

"I think X Factor was a bit boring this year compared to last year. That's why Strictly got more viewers!"

"I think the X Factor had a popular line up of judges last year, and that's what people liked about it. When the judges changed, people weren't so sure about it anymore. Strictly only had the advantage because not everyone wanted to watch X Factor with its new line up of judges. Now that X Factor's finished I probably will watch Strictly."

"I think it is because Strictly has got quite good contenders lined up this year. But don't worry X Factor, I'm sure you will be back on track next year!"

"I don't think this year's X Factor was as good as last year's because it was too serious. The only part I really enjoyed was the auditions because they were funny and the singers gave all they could in their peformances."

"I think the X Factor was better because it had really strong acts and better than last year. I'm REALLY GLAD LITTLE MIX WON, GOOD LUCK TO THEM!"

"I think more people are watching Strictly Come Dancing but I would watch X factor over Strictly."

"I think it's because Simon Cowell is not on it anymore. People loved to hear his mean comments."

"I think that the reason more people are changing to Strictly is because X Factor has just been a shipwreck this year. They gave permission for a contestant to leave when people have paid to keep him in and they allow judges to not turn up to shows."

"I'm not sure why people are choosing Strictly over X Factor, maybe they just prefer dancing to singing. WELL DONE LITTLE MIX, YOU GUYS ARE AWESOME!"

"More people are watching Strictly Come Dancing because they're having fun. The X Factor judges are taking it a little too seriously."

"People might be watching Strictly Come Dancing instead of X Factor because it wasn't that good this year. I did enjoy Amelia Lily though, she was excellent."

"I think X Factor has been more competitive and exciting than past years. It was a hard fight for Little Mix but they deserved it."

"I think this year's X Factor wasn't as good as last year's because Simon wasn't on it and Gary isn't as COWELL as Simon! But I am glad Little Mix won!"

"Strictly is funnier because some people on there can't dance."

"I agree that the X Factor is losing its X Factor. People have decided to swap channels because the contestants on X Factor haven't been up to the normal standard."

"I didn't like the X Factor as much this year because there weren't a lot of good singers in. I wanted Craig to win but I am glad Little Mix won. Hopefully Craig will have a big future."

"I think because X Factor has been so serious and people are depending for their lives on it."

"I think people might watch Strictly more than X Factor because there is more attraction in it than X Factor."

"I think they changed to Strictly because Simon Cowell isn't on the X Factor. He made the show interesting. By the way, I LOVE LITTLE MIX!"

"I think the acts aren't at the high standards that they should be, although I absolutely love Little Mix and they deserved to win. I don't think it is because of the judges because they are amazing!"

"I think fewer people are watching the X Factor because Simon Cowell wasn't judging this year. People want to see him judge even though he is definitely the harshest critic. Another thing is that some of the auditions are just silly. They know they can't sing and even though it may be funny to watch for a while, the show is looking for the next SINGING STAR who will actually make records."

"I think more people are watching Strictly than X Factor because of the new judges. Last year EVERYONE liked Cheryl Cole and everyone watched it because of Simon Cowell."

"I don't know why they were watching Strictly because X Factor is the best programme ever. I have watched Strictly once and X Factor nearly every week."

"I think more people are watching Strictly instead of X Factor because the rules have changed slightly and because Amelia, even though she is an amazing singer, was allowed back on even though she was voted off. Some people think this is unfair. Well done to Little Mix though, they deserved to win!"

"I'd never swap X Factor for Strictly! Not at all, I know it will be back on track next year but it is just amazing!"