Scientists try to bring woolly mammoth back from dead 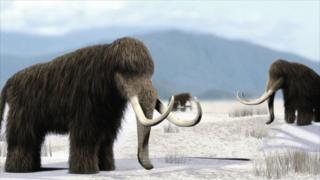 It sounds like the film, Jurassic Park but scientists in Russia and Japan are experimenting to see if they can bring a woolly mammoth back from the dead.

Their starting point could be a fossilised thigh bone found in August which contains well-preserved bone marrow cells.

They'd be cloned and inserted into an egg of an African Elephant, the mammoth's closest surviving relative.

The woolly mammoth became extinct over 4000 years ago.

Experts think that might have happened when climate change affected the vegetation they ate.

Bringing a mammoth back won't be easy.

The Russian and Japanese scientists will need to find a suitable female elephant to have the calf but woolly mammoths were much bigger than modern elephants, so this may not be possible.

The calf would also actually be half-elephant, half-mammoth, so it wouldn't look exactly like a pre-historic mammoth.

On the other hand, we know cloning can work. The first animal to be cloned was a sheep named Dolly, in 1997, who lived to the age of six. And an extinct Pyrenean ibex was brought back from 10-year old DNA, though it didn't survive very long.