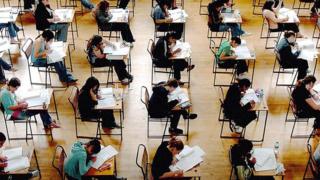 Investigations have been launched in England and Wales into claims some examiners have given teachers unfair advice on GCSE and A Level questions.

Examiners are allowed to offer advice to teachers but not give the questions away.

But the Daily Telegraph says it filmed an examiner from the WJEC exam board doing that and also explaining what words people taking the exams should use.

Two examiners have now been suspended.

Love them or hate them, exams and tests are a big part of school life and the people who regulate exams and the boards which set them have said all tests should be run in a 'fair and open' way.

Teachers were paying to have special lessons from the examiners.

People are worried that if teachers are told what to expect, they could encourage their pupils to cheat, which would make exams unfair, although there's no suggestion that's happened here.