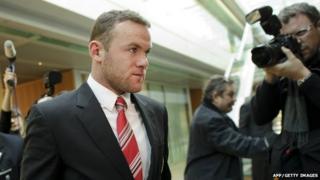 The England striker was given the punishment after his red card for kicking Montenegro player Miodrag Dzudovic during October's 2-2 draw.

But he will still miss the first two clashes against France and Sweden.

Rooney's also agreed to do one day of community service with a Uefa project.

Euro 2012 will be hosted by Poland and Ukraine in June and July.