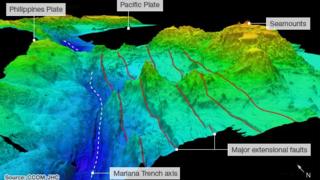 The world's deepest ocean trench has been re-mapped in more detail than ever before.

The Mariana Trench, in the Pacific Ocean, is 1,553 miles long. That's about the distance from Britain to the top of Africa.

At its deepest point, it's 10,994 metres below sea level, which would be deep enough to swallow Mount Everest.

The scientists used an echosounder attached to a US Navy ship to make the measurements.

It bounces sound waves off the ocean bed. The time it takes for the sound to get back to the ship shows how deep the ocean is. 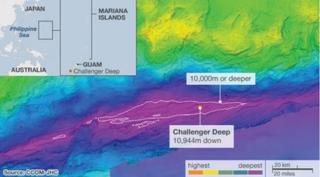 Other
This is the map the echosounder produced

The data's been collected to help the USA work out how much land it owns underwater near places it controls like the island of Guam.

But it also gives geologists a really clear and accurate picture of the one of the most unexplored places on Earth.

So far, only two humans have ever visited the deepest point of the Mariana Trench, Challenger Deep - Don Walsh and Jacques Piccard over 50 years ago - and back then, they really were going into the unknown.

New missions to return to the trench are being planned but this time they'll be prepared with a brand new map.