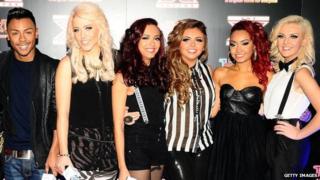 Music seller HMV has apologised after declaring Amelia Lily the X Factor winner on its website.

A page for the winner's single was posted for pre-order, five days before the final of the competition.

HMV said they meant to put up a page for each of the three finalists but only uploaded one by mistake, due to a "technical error".

Amelia will sing against Marcus Collins and Little Mix in this weekend's final, being held at Wembley Arena. 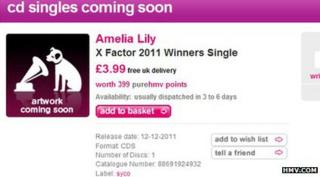 This isn't the first time Amelia Lily's been at the centre of an X Factor controversy.

She reached the final after being voted off by her mentor Kelly Rowland in the first week of live shows.

She was then brought back by a public vote after Frankie Cocozza left the show.

Before presenter Dermot O'Leary told viewers vote lines were no longer open, ITV's Scottish franchise STV claimed on its website that Amelia Lily had been voted back in, leading to rumours the voting was rigged.

Some people say HMV's mistake shows the competition is rigged but X Factor bosses have angrily denied those claims.