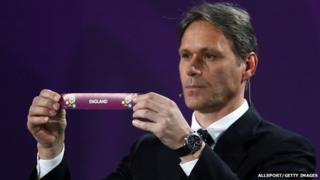 England have been drawn against France, Sweden and co-hosts Ukraine in Group D for the Euro 2012 tournament.

Fabio Capello will be pleased to have avoided some of the bigger names, such as world champions Spain.

But being in Group D means England's first three games will be in Ukraine and not Poland, where their training base is.

That means they face journeys of up to 930 miles to get to matches!

England's first game is against France on 11 June at Donetsk in Ukraine.

Who's in which group?