There are signs that a volcano hundred of metres under a glacier in Iceland is about to erupt - and could cause massive floods.

Scientists monitoring Katla say there have been 500 tremors in the past month - that's a lot.

If it erupts, heat from the molten rock will melt the ice sitting on top of it, and could send billions of gallons of water into the Atlantic Ocean.

It caused so much melting that icebergs were swept into the ocean.

The volume of water created during an eruption in 1755 equalled the amount of water in all of the world's largest rivers combined! 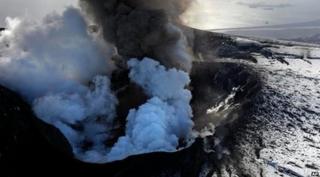 AP
The Eyjafjallajokull volcano erupted in Iceland in April 2010

When Eyjafjallajokull blew up

Ash from the Eyjafjallajokull volcano caused massive disruption to loads of airline flights when it erupted last year.

But despite the huge clouds of ash, it was a relatively small eruption in terms of how much material came out.

In the three times that Eyjafjallajokull is known to have erupted in human history, scientists say that Katla did so soon after.

But volcanoes all have different personalities, meaning we don't know quite what to expect with Katla.

Volcano expert Professor Pall Einarsson said: "Katla is a very active and versatile volcano. It has a long history of large eruptions, some of which have caused considerable damage."

But he added: "We have had alarms about Katla several times."