Man United dumped out of cup 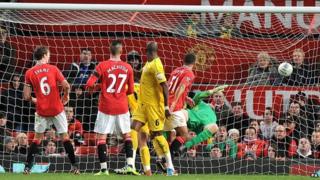 Palace took the lead through a stunning swerving strike from Darren Ambrose but United replied with a Federico Macheda penalty.

But Palace forced the game into extra-time and grabbed the winner with a Glenn Murray header.

There was even more good news for Crystal Palace - they've avoided Premier League big guns Manchester City and Liverpool in the semi-finals and will play fellow Championship side Cardiff for a place in the final.