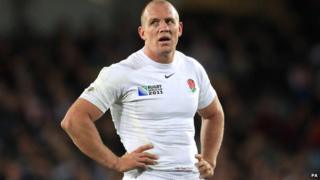 Mike Tindall is back in England's rugby union squad after being kicked out following the World Cup.

The captain was dropped and given a big fine after being accused of bad behaviour during England's World Cup campaign.

But after a successful appeal he will be allowed to play for his country again, and his fine has been reduced.

An appeal is where you ask for a judgement to be reconsidered.

Mike Tindall wasn't the only England player to get in trouble for his behaviour out in New Zealand.

Winger Chris Ashton and flanker James Haskell were also punished for making rude comments to a hotel worker, but they weren't dropped from the side. Hooker Dylan Hartley was cleared of doing anything wrong but all three were made to say sorry.

And centre Manu Tuilagi got a big fine for wearing a sponsored mouthguard - and another fine for jumping off a ferry in Auckland.