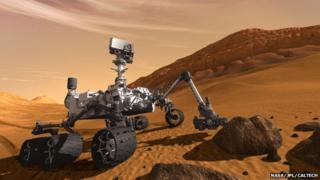 A brand new robot on wheels called Curiosity is being sent to Mars on a 10-year mission.

Curiosity is the size of a small car and is the biggest, best-equipped and heaviest space robot ever to be launched.

It has an incredible collection of hi-tech Nasa gear on board to assist in its mission to explore Mars.

But scientists are stressing the main reason for the mission is not to find life.

The main purpose is to learn more about the surface of the planet.

The plan is for Curiosity to land in a massive crater on Mars. The vehicle will then drive around different parts of the crater. 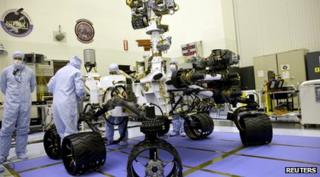 Reuters
Curiosity will be kitted out with stacks of top technology

Tools on board will be able to remove dust from rock surfaces, drill into rocks, and to scoop up samples.

It'll have a colour camera for high-definition videos.

An infrared laser beam will point at rocks or ice up to seven metres away and 'excite' the atoms, which helps to figure out what chemicals are there.

The list just goes on and on - a weather station to look at climate and temperatures, and a take-off and landing system that allows it to move around accurately.

Experts at Nasa, the American space agency, hope it will eventually be able to climb one of the mountains on Mars.

With a plutonium battery, it has the power to keep rolling for more than 10 years.