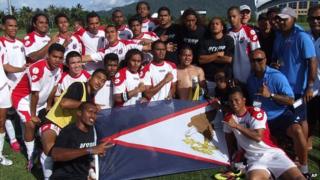 The worst international footy team in the world have finally won a game.

The team managed a 2-1 victory over Tonga and celebrated as if they had won a major championship.

Back in 2001, American Samoa lost 31-0 to Australia - the heaviest defeat in international football history!

They're in joint bottom place in the Fifa world rankings - alongside Andorra, Montserrat, Samoa and San Marino.

The coach of the team is hoping the win will inspire them to many more victories.

We think it's great and it goes to show that you should never give up.