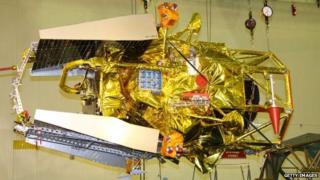 Scientists have regained contact with a space probe on a mission to Mars.

Phobos-Grunt was launched on 9 November, but it has been stuck in Earth's orbit after its engine broke.

Communication was lost, but now the European Space Agency says it's picking up its signal again and there are hopes that they might be able to fix it.

The Russian probe is going to one of Mars' moons called Phobos to collect samples of rocks and dust, and bring them back to Earth for research.

But the scientists are going to have to work fast to get it working again.

Soon Mars' orbit will take the planet too far from Earth for the probe to travel there.