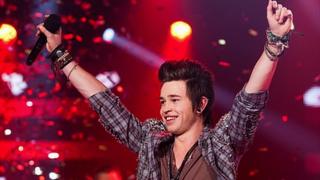 A 16-year-old from Britain has won the Australian version of The X Factor.

His relatives back home hosted a party during the final, but they could only watch it through a friend in Australia's webcam.

When the result was announced they all jumped around, shouted and celebrated.

During the contest Reece performed with Kylie Minogue and his first single has already topped the iTunes chart in Australia.

Reece told the BBC: "I'm 17 tomorrow and it's not a bad birthday present."

His album will be released in early December.