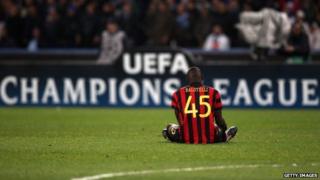 Manchester City's dreams of Champion's League glory are in tatters after losing to Napoli 2-1.

The result means that they're down to third in their group and they'll be lucky to reach the knock-out stage.

City went a goal down after 18 minutes but equalised before half-time with a Mario Balotelli tap-in.

Edinson Cavani got his second goal for Napoli soon after the break with a great low volley, winning the match for the Italian side. 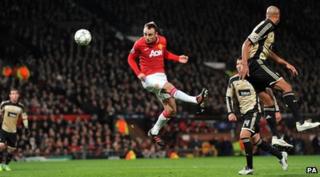 It wasn't a great night for Manchester United either, who drew against Benfica 2-2.

Dimitar Berbatov and Darren Fletcher got the goals for United.

The Reds need at least a draw in their final group match against Basel to reach the last 16.

Manager Sir Alex Ferguson says: "It will be a hard game in Basel. The chips are down but I have every confidence in the team."