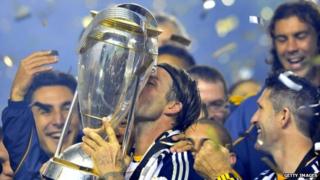 David Beckham has helped his team LA Galaxy win the Major League Soccer Cup (the US version of the Premier League).

It was a Becks flick on that helped set up the only goal in the 1-0 win against Houston Dynamo in the final.

It might turn out to be his last match in America as his contract is ending and he's expected to move to a club in Europe.

Becks joined LA Galaxy from Real Madrid in 2007. He said: "Whether I stay or not, I've had an amazing five years."