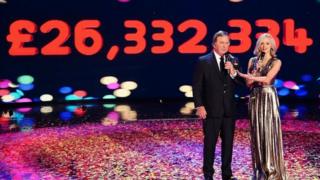 A record £26 million was raised during the BBC's Children in Need show on Friday night.

One Direction opened the show performing their single What Makes You Beautiful.

The six-hour spectacular was packed full of celebs including JLS, the cast of EastEnders, Westlife, Susan Boyle and even the Muppets!

At the end of the show, host Terry Wogan said: "That is the greatest single total we have ever made in one night, so thank you."

The money goes to support children's charities across Britain.