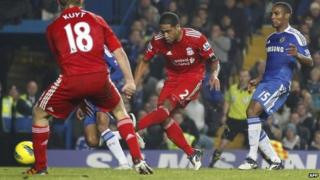 Glen Johnson scored a brilliant goal for Liverpool in the 87th minute of their clash against Chelsea to snatch a win.

Maxi Rodriguez had given the Reds a first half lead but Daniel Sturridge equalised for Chelsea after the break.

It looked like the match was heading for a draw, but with three minutes to go Johnson dribbled through the Chelsea defence and slotted a shot into the bottom corner.

The result means that Liverpool are up to sixth place in the Premier League, equal on points with fourth placed Chelsea, Tottenham and Arsenal.

In the other weekend results there were wins for Manchester City, Manchester United, Arsenal, Everton, QPR and West Brom.