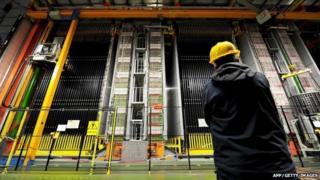 An experiment to see if particles can travel faster than the speed of light has been re-done - with positive results once again.

In September, tests in Switzerland appeared to show that particles, called neutrinos, travelled a tiny fraction of a second faster than light.

But some experts doubted the findings because they said the 'bunches' of neutrinos were too long.

This time they used shorter bunches - and they still got the same outcome.

It's a big deal because much of physics is based on a rule that nothing can travel faster than light.

If the results are proved correct, then it could completely change the way we think about science.

The experiment involved sending the neutrinos through 454 miles of rock.

It was carried out at Cern, the world's largest physics lab in Switzerland.