Gary Barlow and a host of famous acts rock Manchester

Some of the biggest stars in music rocked Manchester on Thursday night to raise money for Children in Need.

None of them disappointed the crowd of 14,000 at the MEN Arena.

The show, organised by X Factor judge Gary Barlow kicked off with Lady Gaga and continued with huge acts such as Elbow, Coldplay, N-Dubz and Jessie J.

No less than three of the current X Factor judges ended up on stage - Kelly Rowland, Tulisa Contostavlos, and Gary himself.

And X Factor's most successful act, JLS, wowed the crowd with two of their biggest hits.

In between performances the crowd saw short films about the work of Children in Need. Everyone was urged to donate to the charity, or to do something to raise money. 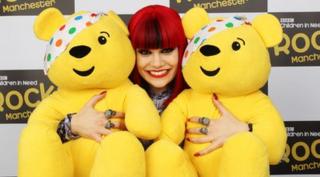 Getty Images
Jessie J had a cuddle with not one but two Pudseys!

Jessie J duetted with James Morrison. Tulisa of N-Dubz led The Collective, a group of top acts formed specially for Children in Need including Tinchy Stryder, Wretch 32 and Mz Bratt.

Gary Barlow was due to be joined by Cheryl Cole but she had to pull out with a throat infection. Instead, Gary duetted with the crowd!

The show was presented by Chris Moyles, Fearne Cotton, and former Doctor Who star David Tennant.

BBC Children in Need continues on BBC One on Friday night.