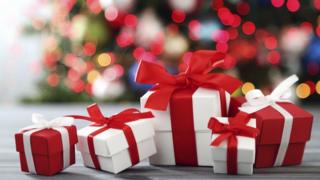 In the UK, many of us enjoy turkey, mince pies and presents on 25 December, but Christmas can be celebrated in different ways in other countries.

Newsround checks out ten festive traditions from across Europe.

Christmas starts on 8 December in Spain with the Feast of the Immaculate Conception.

Another thing that happens in Catalonia on the 8th is the beating of the Tió de Nadal or Christmas log... bare with us here because this could sound a little strange.

Every night until the 24th of December, children 'feed' the happy log with dried fruit and nuts. They also cover up Tió de Nadal with a blanket so he stays warm. 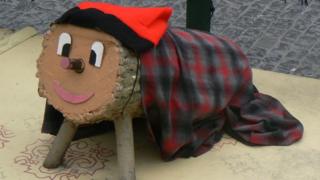 Wikimedia commons
This is Tió de Nadal nad kids fill him up with lots of sweet treats and then beat him with sticks...

Then, come Christmas Eve, the little log is brought out and beaten with sticks by children while they sing a traditional song.

After this the children look under the blanket to find that Tió de Nadal has 'pooped' out lots of treats!

Another tradition happens on 22 December. There is a big lottery draw called El Gordo, which is covered on the television and on radio, where lots of people win money.

Children may be given some presents on Christmas Day, but traditionally they are opened on 6 January. 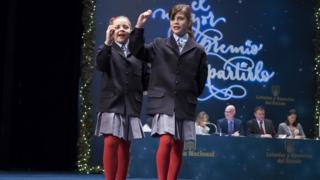 Getty Images
Children read out the numbers in the 2015 Christmas lottery in Spain, called El Gordo

This is called Epiphany, when the Three Kings are said to have visited the baby Jesus and given him their gifts.

Like in Poland, the main Christmas meal is eaten on Christmas Eve, called la Nochebuena.

On 28 December, Spain has their equivalent of April Fools' Day, called Holy Innocents' Day, when people play jokes on each other. 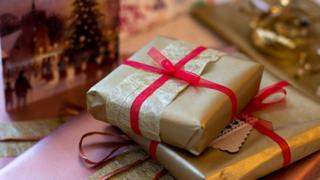 In Spain, presents are exchanged on 6 January, which is also known as Epiphany

In Poland, families traditionally gather for a meal on Christmas Eve, which is known as Wigilia. They will start eating when they see the first star in the night sky.

The meal has 12 courses, which will traditionally include carp, a kind of fish. 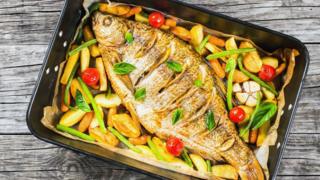 Getty Images
Carp, a kind of fish, is traditionally eaten in Poland on Christmas Eve

It will also include the family sharing a special bread wafer called "Oplatek", which symbolises forgiveness.

The grown-ups will give presents to each other on Wigilia, but children might receive presents earlier in the month, on Sw Mikolaj (St Nicholas) Day (6 December). 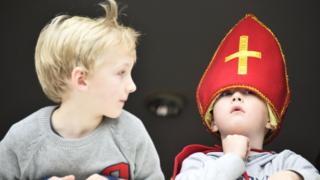 Christmas celebrations start early in the Netherlands, and parts of Belgium, as Sinterklaas - that is St Nicholas - arrives by boat on the last Saturday in November.

Sinterklaas doesn't live at the North Pole like Father Christmas though. For those in the Netherlands, he comes from Spain!

There is a rumour that if children have been naughty, they will be taken back to Spain on the boat!

He travels across the Netherlands dressed in red bishops robes. He also doesn't ride in a sleigh like Father Christmas is seen to do in the UK, instead, he travels on a white horse called Amerigo.

When he arrives, children leave a shoe out for him with a carrot or hay for his horse Amerigo.

Children usually get their presents on the evening of 5 December, which is known as Sinterklaas Eve. 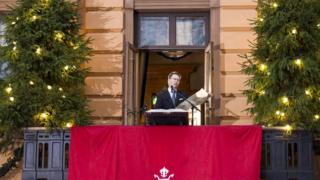 Again, Christmas Eve is a big celebration in Finland, while Christmas Day is quieter and spent relaxing at home with family.

In a city called Turku, a special ceremony happens, which many people watch on television or listen to on the radio.

At the ceremony, the beginning of the Christmas peace period is announced, which lasts from midday on Christmas Eve for 20 days.

Traditionally, people will eat special rice porridge and have plum fruit juice for breakfast on Christmas Eve. There is a tradition to hide almonds in the porridge and whoever finds them will have a lucky year ahead of them.

They may also visit a sauna to relax during the day, before the big celebrations in the evening.

Father Christmas is known as Joulupukki, which means "Christmas Goat". Because of this, people dress up in goat masks to deliver presents. 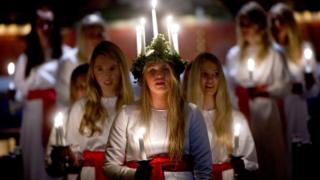 AFP
A procession with a girl playing St Lucia at the front, with her crown of candles

In Sweden, there is a special celebration on St Lucia Day, which is 13 December.

It isn't completely clear where the tradition of St Lucia came from, as there's a few stories that could have mixed together.

One story says that St Lucia was young Christian girl who was killed in the 4th Century because of what she believed in. 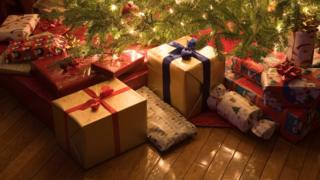 Getty Images
Swedish children will open their presents on 24 December

Swedish people mark this with many Lucia processions, led by a girl in a white dress with a crown of candles.

Children open their presents on Christmas Eve. The night before, they are expected to leave a bowl of porridge out for Tomten - their name for Father Christmas - so that he will leave presents for them.

Swedish people also have their main meal on Christmas Eve. This tends to be a big buffet called Julbord, which people are encouraged to visit several times to eat lots of food!

Norwegian children look out for two creatures at Christmas.

First is a creature like a goat called Julebukk, who is a present-carrying gnome. Then there is Jul Nisse, who guards farm animals and plays tricks on children if they don't leave porridge out for him. 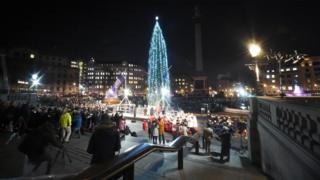 Getty Images
Norway donates a Christmas tree to the UK every single year. Here is 2016's tree in Trafalgar Square in London

They have to do this if they want presents to be left for them, which they open on Christmas Eve after the main meal.

Norway also gives the UK a Christmas tree every year, which stands in Trafalgar Square in London. This is to say thank you for helping Norway during World War II. 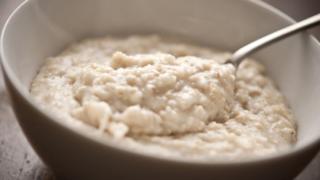 Getty Images
Children in Norway leave out porridge for Jul Nisse, a bit like kids in the UK might leave a mince pie for Father Christmas

Children leave shoes outside of their front door, which Father Christmas - or Nikolaus, as they call him - will leave presents in if they have been good.

If they've been naughty, his servant Knecht Ruprecht will leave twigs for them! 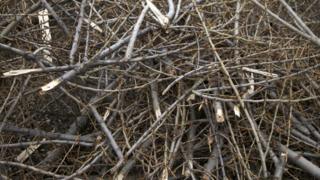 Getty Images
If they've been naughty, German children will find twigs have been left for them!

A meal is eaten on Christmas Eve, which won't contain any meat. Children will also open their presents on 24 December.

Meat can be eaten in a feast on Christmas Day.

Epiphany (6 January) is marked in Italy when children will receive a stocking of sweets if they've been good or a stocking full of coal if they haven't.

This is brought by the Italian Christmas witch, who is called La Befana. 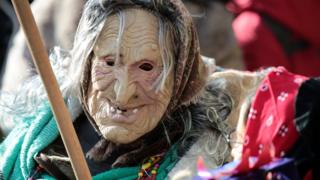 Getty Images
Somebody dressed up as La Befana in Italy

Some say she accompanied the Wise Men on their way to baby Jesus on Epiphany.

She is said to be old, ugly and wears bad clothes, because she is a symbol for the old year which has ended.

A bit like people in the UK might leave a carrot for Rudolph and a mince pie for Father Christmas on Christmas Eve, some families will leave a glass of wine and some food for La Befana. 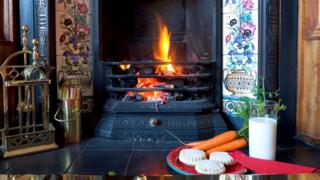 Getty Images
Italians might leave a drink and some food out for La Befana when she visits, just like in the UK we might leave some food and drink for Father Christmas and his reindeer

Like with many families in the UK, lunch on Christmas Day is the most important meal.

Children in Iceland have to wait until the Christmas Eve meal is finished before they are allowed to open their presents.

Traditionally, the main dish of the meal is called Hangikjot, which is a leg of roast lamb. 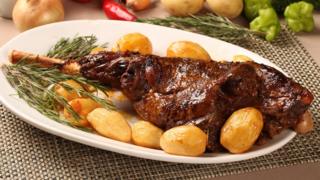 These mischievous characters are said to live in the mountains and visit towns one by one in the 13 days leading up to Christmas.

There is a tradition that says everyone must receive a new piece of clothing for Christmas. 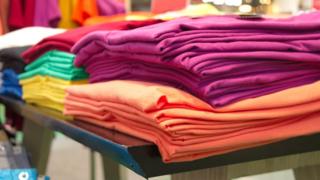 Getty Images
Expect some new clothes for Christmas if you live in Iceland!

If they don't, they might be eaten by a giant Christmas cat who belongs to the Yule lads' mum called Grýla!

In many places in Greece, Easter is celebrated more than Christmas.

However, Christmas is still important. Children go from house to house on Christmas Eve, playing music and singing carols in return for treats to eat.

Before Christmas, fresh basil is wrapped around a wooden cross, which is used to sprinkle water around the house to keep away mischievous goblins called Killantzaroi. 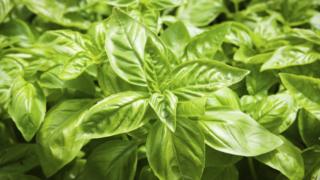 Some people might also keep a fire lit which they think will stop the goblins causing chaos!

Presents are usually given on 1 January.

Why do we kiss under the mistletoe?