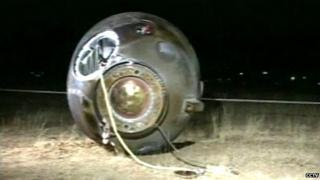 The Chinese spacecraft that made the country's first ever docking in space has landed back on Earth.

Shenzhou 8 touched down in the desert in China on Thursday, with help from a parachute.

It spent just under 17 days in orbit, during which the unmanned Shenzhou capsule joined up with China's mini spacelab, Tiangong-1.

The successful mission is big news for China, as it wants to send its own astronauts to the spacelab next year.

China has also revealed that it wants to have its own space station by the year 2020.