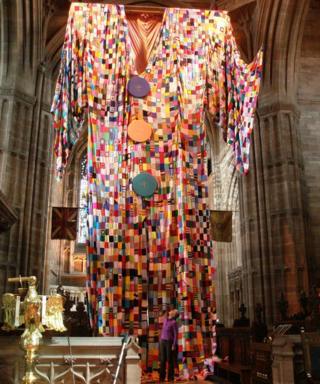 Here's a coat to make Joseph and his Amazing Technicolour Dreamcoat jealous - it's officially the world's largest jacket!

The record-breaking 'Coat of Many Colours' is made up of more than 8,832 knitted squares.

It was created by kids and parishioners at St George's Church and primary school in Stockport, Greater Manchester.

The giant coat will now be taken apart to make blankets to send to Africa.

It measures 13m by 5.5m - that's big enough to cover more than half a tennis court. It weighs around the same as two average-sized adult men.

Guinness World Records have confirmed that it's beaten the previous record held by a group in Ukraine, eastern Europe.