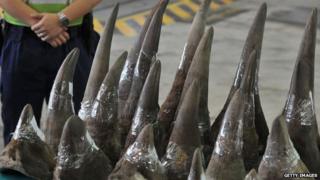 Officials in Hong Kong have discovered 33 horns from highly endangered rhinoceroses and hundreds of pieces of ivory worth over a million pounds.

The horns were being smuggled into China from South Africa, say the officials.

Smuggling - when products are secretly taken abroad - is illegal.

Rhino horn is used for traditional medicine in parts of Asia, but scientists say it has no medicinal properties.

It's also used for jewellery in the Middle East.

It's thought that around 17 rhinos would have been killed to produce this number of horns.

Along with the horns, 758 ivory chopsticks and 127 ivory bracelets were found hidden under layers of plastic and tin foil.

This may have been a disguise by the smugglers to stop them being detected by X-ray scanners. 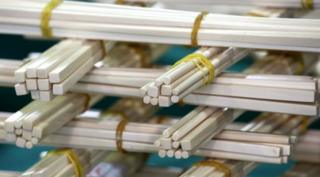 Reuters
These chopsticks are made from ivory, which comes from elephant tusks

The rhinos that the horns come from are extremely rare. There are less than 25,000 left in the world.

That sounds like a lot but it's few enough to describe them as an endangered species.