The clearance of the Dale Farm site is complete 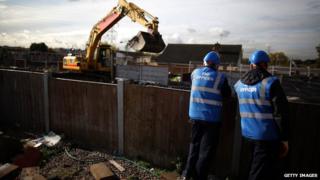 The clearance of the UK's largest illegal travellers' site has finished, according to the man in charge of doing it.

Tony Ball, who runs the council, said caravans had been removed from 51 plots at Dale Farm which did not have permission to be there.

He also said Dale Farm will go back to being a 'green belt' site.

That means it'll be mainly fields, and no major buildings unless they have special permission to be put there.

About 85 families used to live illegally on the site. In October they were forced to leave.

The operation to remove them led to violence and 43 arrests by police. 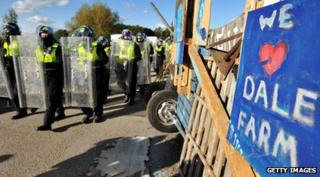 Getty Images
Scenes at Dale Farm in October were violent

It followed a 10-year argument between the travellers and Basildon Council.

The council has said most of them have now found other places to live.

But some of the former residents want to be allowed to live in caravans and not normal houses, and are waiting for the courts to decide.