Doctor Who 'to be made into a film' 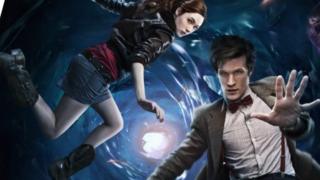 Dr Who might be made into a big-screen movie by David Yates, the director of the recent Harry Potter films.

He's told the media in America that he is about to start work on developing a movie version of the show.

David Yates directed the last four Potter films, and says he would take a fresh approach to a film with the Doctor.

"We're going to spend two to three years to get it right," he said.

He also said the movie would be very different from the TV series written by Russell T Davies and Steven Moffat.

The next episode of Doctor Who on BBC One will be the Christmas Special in December 2011. It will be set in World War II.

Chat: What would YOUR Dr Who movie be about?

We asked what YOU would want to see in a Dr Who film - what adventures would the Doctor get up to?

Here's what you came up with:

"The future Queen gets kidnapped and the Doctor goes after her, but she turns out to be an alien! She then sets war on her own country and the Doctor has to try and stop her!"

"The Doctor, Amy and Rory all go to the Great Wall of China and they find a giant Dalek empire frozen! Then Amy accidentally gets turned into a Dalek by a machine. The Doctor and Rory will then have to try and get back Amy!"

"I think the idea of a Doctor Who film is amazing and if I were to create one then it would feature the Daleks or a parallel universe. There would also be a little bit of romance in it too!"

"I think the movie should be about how the Doctor got the name 'Doctor' and why he stole a Tardis!"

"The Doctor Who movie should be set in the time of Elizabeth I!"

"I think it should be set with the master stealing the Tardis. He would go around changing fixed points in time until the Doctor stops him."

"It should be about when the Doctor lands his Tardis in monster land and the Tardis gets smashed to pieces and he tries to figure out a way to get out!"

"I think the Doctor Who movie should be about the Doctor's family he lost in the time war."

"I would adore a movie about why the Doctor left Gallifrey. It would be very interesting to other viewers!"

"The movie could be set it in the time of dinosaurs! That would be so cool."

"I would love to see a movie about the origins the Doctor and why he left Gallifrey."

"I don't think a Doctor Who film is a good idea because it probably wouldn't be anything like Doctor Who on telly and that would spoil it."

"I think there should be a new alien - a horrible creature that makes a mash-up of all his enemies, old and new."

"I think it would be great if the Doctor had a brother who was trying to be emperor of all of time and space."

"I think they shouldn't make a movie of Doctor Who because it was ONLY made to broadcast on TV originally! I'm a very big Whovian and would be sad to see it as a movie. All that hard work on set for over forty years would be lost."

"I would have several versions of the Daleks, the cyber men and the sontarans working together to trap the last 5 doctors. In the end all are mind wiped except the 11th so they won't know what happened until they become him."

"If they do make a movie about Doctor Who, they have to keep Matt Smith as the Doctor because he's a really good actor."

"I would make it about the timeline of the Doctors, to celebrate the adventures. I would also bring old friends such as Martha or Rose back but have new aliens and enemies."

"I believe a Doctor Who movie should go back to the basics, something like 'The Ark In Space', 'Genesis of the Daleks' or 'The Talons Of Weing-Chiang'"

"It should definitely be a prequel to the whole Dr Who story: How he first defeated the daleks in the time war and how he became to be the Doctor he is now. If there is going to be a movie this is the only way I can see it being done, as most Dr who episodes are mini movies anyway."

"How about the Doctor being involved in the creation of a civilised earth and colonisation of man here. Locations, could include the Pyramids, Machu Pichu, Gobekli Tepe etc. A real who do we think we are and why the Doctor protects the earth including ancient history, myths and archaeology."

"I think the Doctor and Craig (James Corden) should be in the film, they have to find a secret gem to stop the invasion of all monsters."

My doctor who movie would be about Jenny, the doctor's daughter, ever since she started I've always wanted her to come back and almost every single companion of the doctor's would be in it!

"I think it should feature the Doctor having visions of all the other faces he's had. The old aliens come back. It could be called 'All things old'."

"I really don't like the sound of a Doctor Who movie. It could ruin the TV show."

"My Doctor Who movie would be about the Doctor finding his long lost time lord daughter."

"The Time war, because we could be able to see the return of the 8th Doctor, Leela, K9, Daleks and the time lords. That would be the best film ever!"

"My Dr Who movie would be a Princess and the Frog crossover and Matt Smith's Doctor would sing a song!"

"I think the Daleks should be in the new film. I like the Daleks."

"The movie would be about a dangerous new pencil. You can draw anything and it comes to life. Bad people draw bad things so the Doctor has to save the Earth and the Universe."

"I want people to have magical powers and meet aliens on their planets. Then all the people that have helped the Doctor will have a final fight against the enemies and the Doctor wins."

"I don't think there should be a Doctor Who film because if people don't like it they won't try watching the TV episodes."

"I think the Daleks, Cybermen, Silence, Sontarans and others should team up to steal the Tardis."

"I don't think Dr Who as a movie is a good idea because it would not be the same as the TV shows and wouldn't leave you on the edge of your seat for a week."

"If I made a Doctor Who movie it would include the Daleks and have an appearance of a younger version of the Doctor."

"I think the movie should include Karen Gillan and David Tennant, they are the best Dr Who actors."

"My Doctor Who movie would feature all the Doctor's enemies, they would come together and form an alliance."

"I think the perfect Dr Who movie would have the Slitheen coming back with an army."

"I would like to see magic happen - Harry, Ron and Hermione could meet the Doctor?"

"I think a Doctor Who movie is a good idea because it could feature old enemies and new friends."