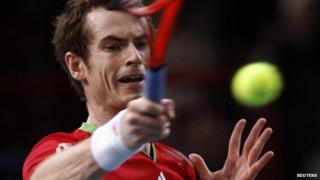 Andy Murray blasted into the quarter-finals of the Paris Masters with a straight sets win against Andy Roddick.

The British number one beat the former US Open champion, 6-2 6-2 and will now face Tomas Berdych or Janko Tipsarevic.

Murray started the match by breaking Roddick's serve and wrapped up the first set in just 31 minutes.

Roddick got in trouble for smashing his racquet when he went 3-0 down in the second set, but it didn't stop Andy scoring his 27th win in 28 matches.