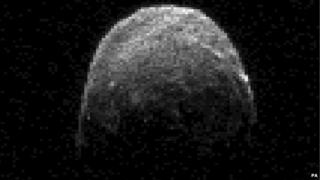 An asteroid the size of an aircraft carrier raced past Earth last night, the largest to come past us since 1976.

Not only was it big but it's the closest an asteroid has been to Earth in the past 200 years, say Nasa.

Despite being closer to us than the moon it could only be seen if you had a pretty decent telescope.

The rock came closest to Earth at about 11.30 on Tuesday night when it soared over the Pacific ocean close to Guatemala City in South America.

Scientists in the US and the Caribbean used radio telescopes to try and better understand what it is made of and how it's shaped.

So far scientists are able to predict the asteroids path for the next hundred years but the latest fly-past will mean they'll be able to look even further into the asteroids future.

Despite the rock coming close, Earth was never in danger of being hit. It was still over 200,000 miles away!

The next asteroid this big isn't expected to fly past earth until 2028.