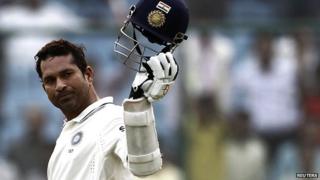 Sachin Tendulkar has broken another record, becoming the first batsman to pass 15,000 runs in Test cricket.

India's favourite cricketer, also known as the Little Master, passed the record in his 182nd Test match, against West Indies on Tuesday.

But he missed out on becoming the first man to score 100 international centuries after he was out for 76.

He's been stuck on 99 hundreds since March this year, after he had a poor series against England.

India beat beat West Indies in the first Test of the three-match series in Delhi.