Edinburgh Zoo to grow its own bamboo for giant pandas 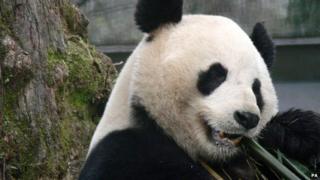 Edinburgh Zoo in Scotland is going to start growing bamboo to help feed two giant pandas who'll be setting up home there in the next few weeks.

Tian Tian and Yang Guang should arrive from China before the end of 2011.

Keepers will need to find a belly-busting 18,000kg of bamboo to feed them EVERY year - that's about the same weight as 3.5 African elephants!

As the zoo won't be able to grow quite that much, lots will still be imported from Amsterdam in the Netherlands.

Between them, Tian Tian and Yang Guang - whose names mean Sweetie and Sunlight - are expected to chomp their way through about 20 three-metre stems, from five different species of bamboo, every day.

The types of bamboo they're given will also change with the seasons, as they would in the wild.

Tian Tian and Yang Guang will be the first giant pandas to live in the UK for 17 years and are due to live at Edinburgh Zoo for the next 10 years.