Chat: Should sport cheats be banned for life? 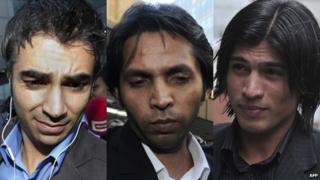 The Pakistan cricketers who cheated during last year's Test match against England have all been given long bans from playing the sport professionally.

Some athletes who are found guilty of using drugs to improve their performance also face bans on competing for several years... but is it enough?

Do you think cheats should never be allowed to compete again? Or is any ban too tough?

What punishment do you think is suitable for sports cheats?

We'd love to hear what you think about cheating in sport, so get in touch!

"I think they should have to go away for about a year and be banned. If they still want to play the sport or they are really good players, then they should be allowed to carry on. If they do it again, it's a ban for life."

"I agree with Arooba, they should be fined with money and put into prison for five years."

"You shouldn't be banned for life, everyone makes mistakes. However, if it happens twice there should be a life suspension."

"I think that it should depend on how bad the cheat is. I think they should get a 2 year ban."

"I think cheats should never be allowed because it doesn't show the meaning of sportsmanship and athletes who are found guilty must be banned from competing for at least 2 years."

"They should be banned because there is a 50/50 chance that they will do it again."

"I think the most suitable punishment for sport cheats would be money - they would have to pay a certain amount - £100,000 or more."

"You shouldn't be cheating in sport games because you will go to jail and get banned."

"I think they should have the punishment they were going to be given i.e. jailed for a couple of years. Then if they truly have learnt that what they did was wrong they can go back into playing."

"I think a group of people should vote whether to ban the cheating player or not."

"They should be aloud to play no matter what people say."