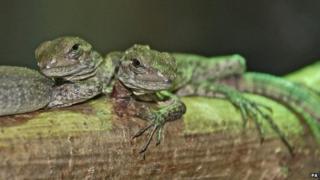 Seventeen rare iguanas, which are usually only found on one island in the world, have hatched at Bristol Zoo.

The Utila spiny-tailed iguanas are an endangered species of reptile and this is the first time they've been bred at a zoo.

Once the iguana eggs were laid, they were kept in an incubator for three months. Now they're hatched, they'll go on display in the zoo's reptile house.

It's all part of a special project to try to boost their numbers.

The creatures are around 15cm long at the moment, but will grow to around 60cm.

They get their name from the Central American island of Utila, where they're found, and from the spiny scales on their tails.