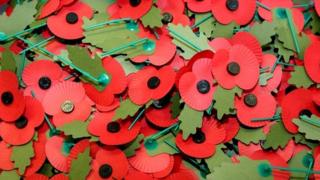 This year's Poppy Appeal has been launched by the Royal British Legion.

In the days leading up to Remembrance Day on 11 November, you will see people on the TV and in the streets wearing a poppy.

It also represents the contribution of families and of the emergency services.

Millions of poppies will be sold over the coming days by tens of thousands of volunteers.

Why do we wear poppies?

The reason poppies are used to remember those who have given their lives in battle is because they are the flowers which grew on the battlefields after World War One ended.

This is described in the famous World War One poem In Flanders Fields.

Ever since then, they have come to be a symbol of remembering not just those who gave their lives in World War One, but all those who have died on behalf of their country. 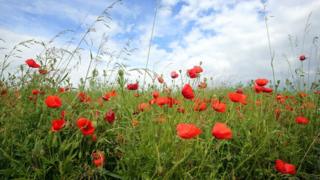 PA
Poppies growing in a field in France, which used to be a battlefield

The money raised from these donations is used to help servicemen and women who are still alive, whose lives have been changed by wars that they fought in.

The money helps veterans who may need to find new jobs or somewhere to live, or any other support they may need.

It is also used to help those who have lost loved ones because of wars. 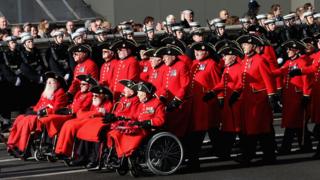 Getty Images
Former soldiers remember those who have lost their lives in war on Remembrance Sunday. You can see the person at the front is carrying a wreath of poppies
Where did it all start?

However, back then the poppies weren't made out of paper like they are today. They were made out of silk.

They sold out straight away and raised more than £106,000 for those whose lives had been affected by the war, by helping to find them jobs and somewhere to live once they were no longer serving in the army. 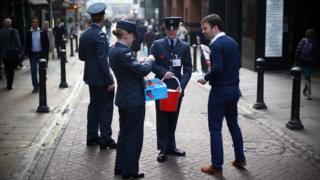 In 1922, a factory was set up where disabled former soldiers were employed to make the poppies.

This factory is still running - and producing many millions of poppies each year - to this very day.

While the majority of people wear their poppy on their chest, there is no right or wrong way to wear a poppy.

As the Royal British Legion says: "We only ask you to wear it with pride." 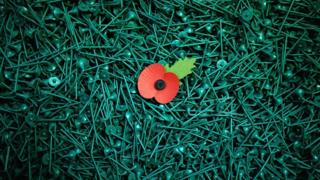 Getty Images
The poppies are made out of two plastic parts and two paper parts, and must be assembled by volunteers. Here you can see a pile of the green stems used to make poppies
What is happening this year?

The Royal British Legion say the 2019 Poppy Appeal is all about communities around Britain coming together to remember "the service and sacrifice, friendship and collaboration of the men and women of Britain, the Commonwealth and Allied nations who fought together", during the Second World War.

In 1944, the collaboration between the Commonwealth nations helped the British achieve victory in critical battles during World War II; The Battle of Monte Cassino, The D-Day Landings and The Battles of Kohima and Imphal. 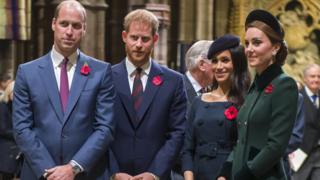