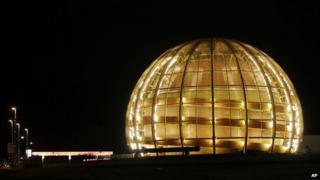 Scientists are repeating an experiment to see whether tiny particles can actually travel faster than the speed of light.

In September tests in Switzerland appeared to show that particles travelled a tiny fraction of a second faster than light.

Much of physics depends on a rule that nothing can travel faster than light.

However some experts weren't convinced so they're doing the experiment differently this time, to check.

The experiments are being carried out at Cern, the world's largest physics lab in Switzerland.

Particles were beamed to another laboratory 454 miles away in Italy and the time it took them to travel the distance was measured.

At first the scientists thought they'd got it wrong, so they repeated the experiment 15,000 times over three years, but they still ended up with the same result.

The new tests will measure the speed in a different way and will run until November.

If the results are proved right, it could completely change the way we think about science.