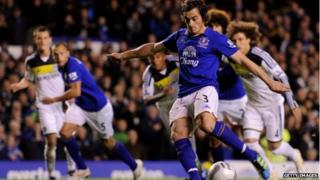 Chelsea are through to the next stage of the Carling Cup after a 2-1 win against Everton.

The Blues left it late in the game to take the lead, as Daniel Sturridge slotted in a second goal in extra time.

Salomon Kalou also scored to take Andre Villas-Boas' team into the final eight of the Carling Cup at Goodison Park on Monday evening.

Everton's Royston Drenthe and Chelsea keeper Ross Turnbull were both sent off, reducing the teams to 10 men.

But Everton managed to land one goal thanks to Louis Saha.

Chelsea had a different line-up as Fernando Torres, Frank Lampard and Juan Mata were kept on the bench.

Manchester City also made it through to the quarter finals of the Carling Cup after thrashing Wolverhampton 5-2.

Four minutes later City had taken the score to 3-1 with goals from Samir Nasri and Edin Dzeko. 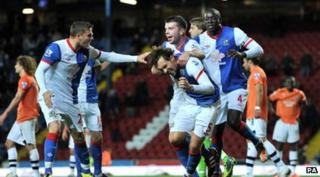 PA
Gael Givet headed in a goal in extra time

At Ewood Park a header from Gael Givet in extra time meant that Blackburn won a place in the next stage of the Carling Cup.

The Rovers won against Newcastle 4-3 after other goals from Ruben Rochina, Morten Gamst Pedersen and Peter Lovenkrands.

Elsewhere Celtic staged a comeback winning against Hibs 4-1 to claim their place in the Scottish Communities League Cup semi-finals.