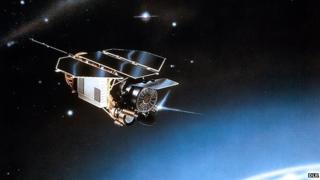 An old German satellite has fallen to earth over the Bay of Bengal, in the Indian Ocean.

The parts of the satellite which survived the plunge to earth would have splashed into the ocean and avoided hitting any areas where people live.

The spacecraft was around half of its original weight when it hit the earth.

The German Rosat was launched in 1990 to survey the X-ray sky and map out sources of high-energy radiation, but in 1999 the spacecraft stopped working.

Radiation is a way that energy or heat moves around and X-rays in the sky tend to come from the hottest parts of the cosmos, like the places around exploded stars and the "edges" of black holes.

At least one piece of space debris returns to the earth every day, and on average one defunct spacecraft or old rocket body comes back into the atmosphere every week.