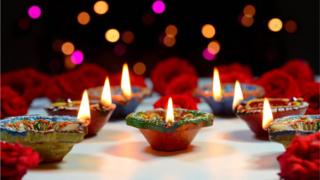 Diwali is the five-day Festival of Lights, celebrated by millions of Hindus, Sikhs and Jains across the world.

Diwali, which for some also coincides with harvest and new year celebrations, is a festival of new beginnings and the triumph of good over evil and light over darkness.

Before you read on, take this Diwali quiz to see how much you know about the festival.

The festival is usually some time between October and November, with the date changing each year.

This year Diwali takes place over five days from 2 November to 6 November with the main day of celebration on Thursday 4 November.

Where does the name Diwali come from?

Houses, shops and public places are decorated with small oil lamps called diyas. People also enjoy fireworks and sweets too, so it's really popular with children.

What's the festival about?

Hindus celebrate the return of deities Rama and Sita to Ayodhya after their 14-year exile. They also celebrate the day Mother Goddess Durga destroyed a demon called Mahisha.

Sikhs particularly celebrate the release from prison of the sixth guru Hargobind Singh in 1619. But Sikhs celebrated the festival before this date.

In fact, the foundation stone of the Golden Temple at Amritsar, the most holy place in the Sikh world, was laid on Diwali in 1577.

The founder of Jainism is Lord Mahavira. During Diwali, Jains celebrate the moment he reached a state called Moksha (nirvana, or eternal bliss).