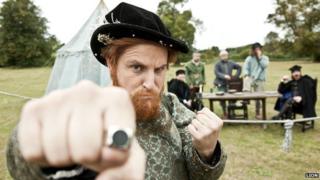 Horrible Histories and Just William are leading the nominations for this year's Children's Baftas.

For best feature film, it'll be tough with Harry Potter and the Deathly Hallows Parts 1 and 2 going up against Disney's Tangled and Kung Fu Panda 2.

This year's awards also offers four prizes voted for by children aged between seven and 14.

The winners will be announced at a London ceremony on 27 November, hosted by Blue Peter presenter Barney Harwood.