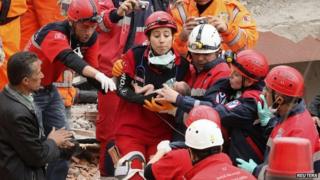 Rescue teams' hopes of finding survivors were fading when they discovered the newborn, called Azra Karaduman, who had been trapped under rubble for nearly two days.

A short while later they managed to free her mother and grandmother who were also trapped in the debris.

The 7.2 magnitude quake hit the east of the country on Sunday.

Tremors were felt in the Van region of the country and hundreds of buildings fell in the town of Ercis.

The Turkish government has said it will give more aid to the thousands of people affected by the disaster, and plans to give 12,000 more tents to Ercis, Van and surrounding villages. 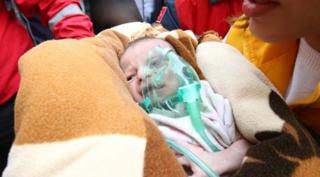 At least 432 people are known to have died and over 1,300 were injured in the quake, but the number of people killed is expected to rise.

Turkey is vulnerable to earthquakes as it sits on geographical fault lines.

Rescue teams with sniffer dogs worked through the night to search for people trapped under the rubble.

Many people have had to sleep outdoors in freezing weather without heating and tents. More than 2,000 homes collapsed due to the quake.

The earthquake struck at a depth of 20km (12 miles), with its epicentre 16km north-east of Van.

It was followed by a series of powerful aftershocks, including two of magnitude 5.6 after the quake and one of 6.0 late on Sunday. There were hundreds more aftershocks carrying on into Monday.

The Christchurch earthquake in New Zealand in February was 6.3 and the Japan quake in March measured 8.9.