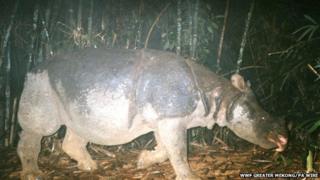 A species of rhino has become extinct in Vietnam, according to a report by conservation groups.

There hasn't been a recorded sighting of a Javan rhino in the country since 2008, but conservationists recently discovered the body of one.

Experts think it was killed by poachers as it had been shot in the leg and its horn had been removed.

It's now been confirmed that the dead rhino was the last of its species on mainland Asia.

The animal charity WWF and the International Rhino Foundation said they had examined rhinoceros dung in a national park in Vietnam over the last two years, and they'd discovered it had all come from a single animal.

It's estimated that there are now fewer than 50 Javan rhinos in the wild and the remaining ones are now all on the island of Java, Indonesia.

There used to be Javan rhinos from the same subspecies in north-east India, Bangladesh and Burma, but they are now also extinct in those places.

There's been an increase in rhino-poaching cases and wildlife experts are blaming the rise in illegal trade on demand from Asia.

Some people in Asia believe that rhino horn can be used in medicines, though scientists say that it doesn't have any benefits.