German satellite Rosat falls back down to Earth 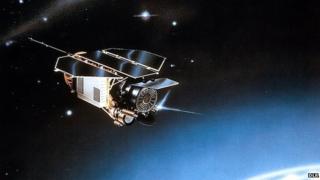 Just weeks after Nasa satellite UARS plunged back to earth, a big German satellite has fallen from the sky.

But, unlike UARS, scientists aren't quite sure where this one landed.

The satellite, called Rosat, re-entered the earth's atmosphere early Sunday morning but there are no reports of anyone seeing it.

Scientists thought that as much as 1.6 tonnes of wreckage - that's more than half of it - could have survived all the way to earth.

They said it could have broken into about thirty different pieces.

But as there haven't been reports of anyone being hurt, they believe the debris probably dived into the ocean somewhere in South East Asia.

Rosat was an X-ray telescope mission and was launched in 1990 to survey the sky. It worked for eight and a half years before its star tracker failed and it could no longer work.

Like UARS, Rosat was expected to hit the ocean, given that so much of the earth's surface is covered by water.

An expert on space debris has said that in future, spacecraft sent into orbit may have to meet stricter guidelines so that less debris falls back to the planet.

Prof Richard Crowther said: "Up until now we've designed satellites to survive the harsh environment of space, and we haven't given much thought to designing them for destructive re-entry.

"But in future, we will have to consider whether we have got this balance right, and perhaps satellites should be designed in such a way that we can ensure more of what comes down is destroyed in the atmosphere and doesn't hit the surface."

Although we don't hear much about it, at least one piece of space debris returns to earth every day. These are very small though.

Something the size of UARS comes along much less often - perhaps once a year.

Much larger objects, like the space station cargo ships, return from orbit several times a year but they are built with technology that guides their dive into a remote part of the Southern Ocean.