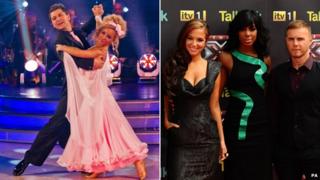 Strictly Come Dancing is winning the ratings war as more people chose to tune into the show than The X Factor.

On Saturday when the two shows were on at the same time, 9.5 million people watched the BBC One dancing contest, while 8.3 million chose The X Factor.

But the amount of people watching the ITV show has fallen by two million compared to the same time last year.

Overall, more people watched The X Factor as the number of viewers peaked at 11.5 million.

But the gap between the two shows is closing, as 11 million watched Strictly at its peak - nearly a million more than last week.

An audience "peak" is the moment in a programme's episode when the highest number of people are watching.

Singer Kelly Rowland and N-Dubz's Tulisa Contostavlos joined The X Factor judging panel in 2011, while Louis Walsh was the only judge to return from the old series. 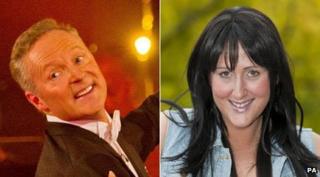 Show creator Simon Cowell left the UK version to launch The X Factor in the US, and his replacement Gary Barlow has criticised the standard of the acts on this year's show.

On Sunday Sami Brookes and Kitty Brucknell were in the bottom two as they failed to get enough public votes.

It was Sami who left after her mentor Louis Walsh voted for his other act Kitty to stay.

In Strictly, McFly's Harry Judd received the first perfect 10 of the season, from judge Alesha Dixon - while comedian Rory Bremner was booted off the show.