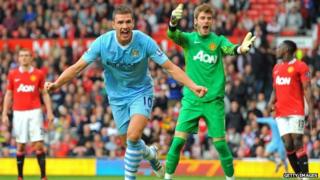 Manchester United suffered their worst home defeat in 56 years after they were beaten by Manchester City 6-1.

City footballers Mario Balotelli and Edin Dzeko both scored twice, while Sergio Aguero and David Silva also added a goal each to the scoreboard.

Roberto Mancini's side were only leading the game 1-0 at half-time, but after the break United were reduced to 10 men when Jonny Evans was sent off. 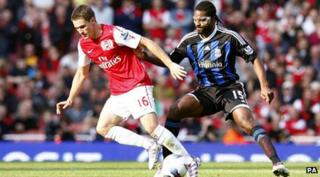 Arsenal also celebrated a win yesterday, after they beat Stoke 3-1.

London rivals Chelsea lost out to QPR in the west London derby.

Heidar Helguson's penalty led QPR to victory while the Blues had both Drogba and Bosingwa sent off.

Elsewhere on Sunday there were wins for Tottenham away at Blackburn and Everton over Fulham.

Saturday saw West Brom beat Midlands rivals Aston Villa at Villa Park, and there were wins for Sunderland and Newcastle too. Liverpool drew 1-1 with Norwich while Wolves snatched a point with two late goals against Swansea.