Horse is rescued after getting stuck in muddy bog 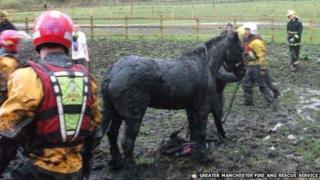 A horse had to be rescued by firefighters after it fell down a ditch and got stuck in a bog of mud.

Pedro, who's 15 and lives on a farm in Manchester, broke through an electric fence and slipped down a hill into the mud.

It was so thick and slippery that he couldn't get back up. Luckily, the farmer spotted Pedro and called for help.

It took two teams of firefighters over an hour to free him. 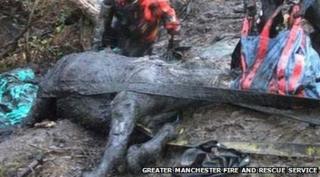 Other
Pedro was really badly stuck, but he's ok now

They had to use special animal rescue boards and ropes to help pull him out and needed lots of strong people to get him over the hill and onto flat ground.

Although Pedro was quite shaken by getting stuck, he wasn't injured and trotted off happily afterwards.