Leah helps release thousands of eels into the wild

Leah's been getting hands-on with some pretty slippery creatures.

She's taking part in one of Britain's most ambitious conservation projects releasing thousands of eels into the wild.

Leah is learning all about the life of eels as part of BBC Autumnwatch, and she's been helping the team at London Zoo box up 25,000 of them, ready for their release into a lake in Wales.

They are very shy, hiding amongst rocks and mostly feed at night.

Her mission will see her travel across Britain to find out why the species are in crisis and what's being done to encourage its survival. 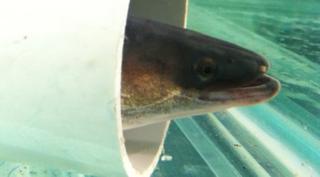 Eels migrate from their place of birth in the Sargasso Sea which is in the middle of the Atlantic. They use the ocean currents to float into Europe and into our rivers.

Over-fishing and the building of dams that block their migration paths are resulting in reduced numbers.

In the autumn when they are mature, they begin their six-month journey back to the Sargasso Sea to spawn and breed.