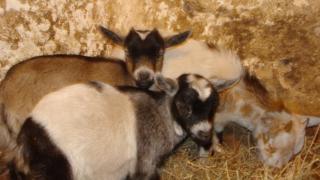 Three baby pygmy goats who were stolen from their farm have been reunited with their mum.

Police found Snowy, Maisy and Billy in a street in Middlesbrough more than a month after going missing from their North Yorkshire home.

The kids were taken from the Easingwold Maze tourist attraction on 4 September.

Their owner Paul Caygill was worried they wouldn't survive without being fed by their mother.

He said the young goats were undernourished and would have to be hand-reared because their mother isn't producing milk anymore. 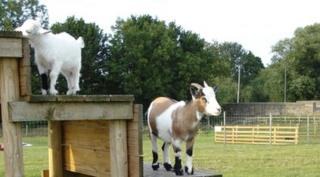 Other
The pygmy goats before they were stolen

"They're in a much different condition to the three that weren't stolen, but we think they'll all pull through," said Mr Caygill.

"It sounds like they've been dumped. They've maybe had them for a while and were struggling with them so got rid of them."

He said the culprits haven't been found yet.