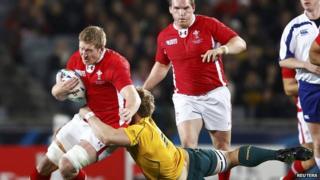 Wales ended their amazing Rugby World Cup adventure on Friday morning with defeat to Australia in the third-place play-off.

They lost 18-21 to the Wallabies in Eden Park in Auckland, New Zealand.

A scrappy first half ended with the Aussies 7-3 ahead thanks to a try from star player Berrick Barnes.

Shane Williams, in his last game for his country, scored early in the second half to give Wales hope but James Hook missed the conversion.

A couple of kicked penalties and a drop goal from Barnes gave Australia a 16-8 lead with just ten minutes left on the clock.

Stephen Jones, on to replace James Hook, kicked a penalty to take Wales within five points, but the decisive moment came at 75 minutes when Ben McCalman ran around a tired Welsh defence to score Australia's second try.

A desperate last effort from Warren Gatland's men saw Leigh Halfpenny eventually run over to claw back a try after the 80 minutes were up, and Stephen Jones slotted the conversion to close the game.

The progress of Wales through the 2011 Rugby World Cup drew support from Welsh fans across the world, and even inspired some English fans too.