Travellers and protesters walk out of Dale Farm 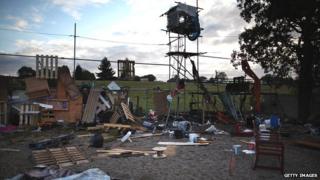 The last travellers and protesters left Dale Farm on Thursday afternoon, walking out of the enclosure in a group.

Bailiffs are now clearing the site - they're employed to clear illegal sites and remove people's belongings.

Police tried to clear the site on Wednesday but they were pelted with missiles, and 23 people were arrested.

Police confirmed that in total 34 people were arrested, but none of them were travellers.

On Thursday morning the scaffolding tower at the entrance was cleared away with large demolition machines.

The residents said they were leaving with "dignity and heads held high".

The travellers now don't know where they'll go next. 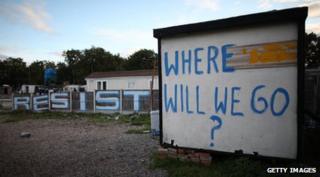 Getty Images
Graffiti on the site shows how residents feel

Mary Sheridan, who has four children, said: "I have nowhere to go, but I was scared by the violence and am worried for my children. As soon as the gate opens I want to leave."

The legal battle to evict Dale Farm's illegal residents has been going on for ten years.

In the UK, anyone who wants to build a new building, even if they own the patch of land they're building on, must get planning permission from their local council first.

The 51 homes at Dale Farm were built without planning permission, so Basildon Council says they're illegal and must be removed.

The Prime Minster David Cameron has supported the eviction, but the move has been criticised by a United Nations Committee.