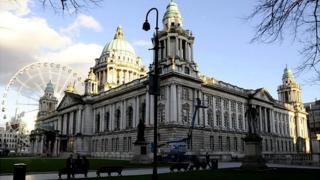 A group of twelve people claiming to detect signs of "paranormal activity" want to carry out night-time investigations inside City Hall in Belfast.

They're now waiting to see if Belfast City Council says yes to their ghostly but serious request.

The investigators claim they've been spooked in other buildings in Northern Ireland before and they want to spend a night in the City Hall building to see if it's haunted.

They're well-equipped with sound recorders, TV monitors and devices to detect temperature changes.

But they can't get the go-ahead unless the people who run Belfast City Council agree to it, and the council leaders haven't decided yet.

They're worried the hall's good reputation might be spoiled if people thought it was haunted. There is currently no evidence to suggest it is!