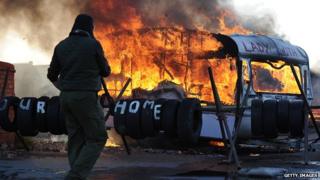 There were violent scenes on Wednesday as police and protesters clashed at the Dale Farm travellers site in Essex.

Riot police arrived at the site early in the morning to begin evicting people who have been living in part of the site illegally.

Fires broke out and bricks were thrown at police, as they broke down a fence to get in at the back of the site.

Police have arrested seven people and have removed protesters from a scaffolding tower at the entrance.

At least 50 officers arrived at the site to prepare the way for bailiffs to clear the residents who are living there illegally.

But some of the remaining residents and many protesters who don't live there, are refusing to go without a fight.

One woman set fire to her own caravan, while many others are chaining and gluing their bodies to various buildings in a bid to stop the eviction.

Resident Kathleen McCarthy said: "We are being dragged out of the only homes we have in this world."

"Our entire community is being ripped apart by Basildon Council and the politicians in government," she said.

The legal battle to evict Dale Farm's illegal residents has been going on for ten years.

In the UK, anyone who wants to build a new building, even if they own the patch of land they're building on, must get planning permission from their local council first.

The 51 homes at Dale Farm were built without planning permission, so Basildon Council says they're illegal and must be removed.

The Prime Minster David Cameron has supported the eviction, but the move has been criticised by a United Nations Committee.